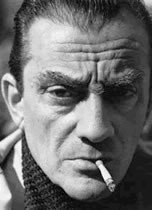 "In the unique frame of the scenic arch, we leave intact all of its possibilities of movement, colour, light, magic. Not realism or neorealism, but imagination, complete performance freedom."

Don Luchino Visconti di Modrone was born in Milan to one of the highest-ranking families of Italy’s nobility. His film career began in Paris, when designer Coco Chanel introduced him to Jean Renoir, with whom he worked on various projects, including as assistant director on Une Partie de Campagne (1936). During this period he became a Marxist, and the dichotomy between his aristocratic heritage and his Marxist convictions would play out throughout his œuvre.

Returning to Italy, Visconti directed his first film, Ossessione (1942). An honest depiction of lower-class life, it was heavily censored by Mussolini's Fascist regime; nonetheless it became a success, and is regarded as the progenitor of the Italian neo-realist movement, whose adherents include Vittorio de Sica and Roberto Rossellini.

His second film, La Terra Trema (1947), commissioned by the Italian Communist Party and focussing on class exploitation in a Sicilian fishing village, garnered Visconti the first of his six nominations for Venice’s Golden Lion. He continued to concentrate on the proletariat with Rocco e i suoi Fratelli (Rocco and his Brothers, 1960), but from this point, Visconti departed from neo-realism, tending instead towards a grandiose, melodramatic style heavily influenced by literature and history. Equally renowned for his theatre and opera direction—he is credited with ‘making’ Maria Callas—his stagey historicity can be seen as representative of his own aristocratic roots.

The epic Il Gattopardo (The Leopard, 1963), based on the novel by Guiseppe Tommasi di Lampedusa, demonstrates this break with his earlier realism. Recounting the decline of the Sicilian aristocracy and the rise of the bourgeoisie, it is an elaborate pæon to a lost world; it was awarded with the Palme d’Or at Cannes that year.

Throughout his career, Visconti plundered literature for his source material: Le Notti Bianchi (1957) was Dostoevsky, Lo Straniero (1967), Camus’ l’Etranger, and famously, Thomas Mann’s Death in Venice (1971)—the film which came the closest to revealing Visconti’s own homosexuality.

In his final years, he returned to the socialistic themes of depravity and introversion in the upper classes with films such as La Cadute degli Dei (The Damned, 1969), Gruppo di Famiglia in un Interno (Conversation Piece, 1972) and L’Innocente (1976). 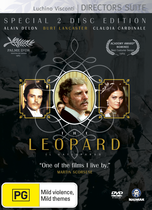