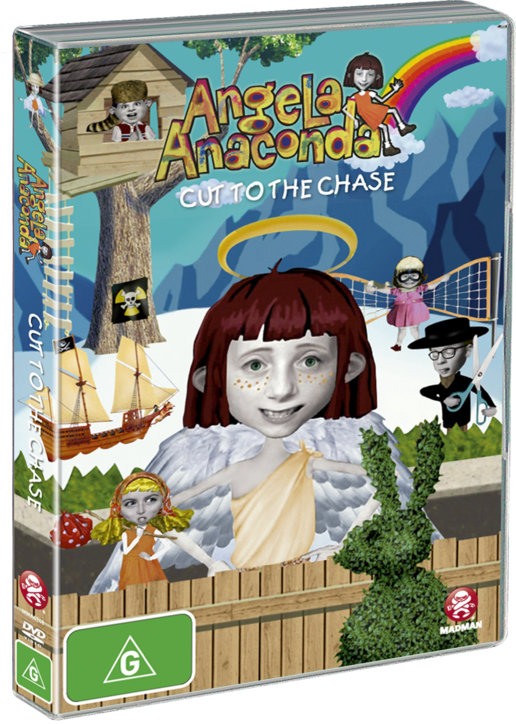 "…if your house has that TV-unfriendly age gap – kids in high school as well as elementary school – this is a show that both age groups would enjoy, and you wouldn’t be terrified about what the younger one is seeing."

Angela barters with friends to keep from being grounded.

Brace yourself for ANGELA ANACONDA, a highly original, wildly irreverent animated children’s series that follows the adventures of one spunky gal named Angela and her posse of equally wacky pals.

Freckled-face and knock-kneed, Angela resides in the small town of Tapwater Springs. Tormented on a regular basis by her arch-nemesis NANETTE MANOIR, Angela’s allies include GINA LASH (resident brain of their school), JOHNNY ABATTI (who is okay, even if he is a boy) and pasty little GORDY RHINEHART (who is overly dependent on his inhaler). Together, armed with wit and determination, they combat the daily trials and tribulation common to primary school kids. Includes 5 ANGELA ANACONDA EPISODES... More »

Brace yourself for ANGELA ANACONDA, a highly original, wildly irreverent animated children’s series that follows the adventures of one spunky gal named Angela and her posse of equally wacky pals.

Freckled-face and knock-kneed, Angela resides in the small town of Tapwater Springs. Tormented on a regular basis by her arch-nemesis NANETTE MANOIR, Angela’s allies include GINA LASH (resident brain of their school), JOHNNY ABATTI (who is okay, even if he is a boy) and pasty little GORDY RHINEHART (who is overly dependent on his inhaler). Together, armed with wit and determination, they combat the daily trials and tribulation common to primary school kids. Includes 5 ANGELA ANACONDA EPISODES

Angela is so excited about wearing her new 'highway-worker-orange' windbreaker to school she completely forgets that it is St. Patrick's day. According to Tapwater Springs' tradition you can pinch anyone not wearing green and when Angela arrives at school that morning everyone in her class can hardly wait until recess time to take advantage of Angela's forgetfulness. Angela tries everything she can to get out of recess including trying to get herself in trouble. At the last minute Angela realizes that her new windbreaker is reversible and that the other side is 'frozen pea' green! She triumphantly marches out of the classroom only to be immediately pinched by none other than Nanette. Too bad for Ninnie-Poo, the Tapwater Springs' tradition also state that anyone who does pinch someone who is wearing green gets 'double pinch' backs!

Episode 16B – "Two Can Play" – The school play ends up being a lesson in manners.

Mrs. Brinks is handing out parts to the school play "Miss Etiquette – the musical" and of course Nanette gets chosen for the lead role. Much to Angela's dismay she gets chosen to be Nanette's understudy. Angela refuses to learn the role on account of Nanette would never miss her chance to be a star. When Nanette starts feeling ill Angela gives her a power smoothie guaranteed to fight of any cold. Unfortunately Nanette feels no better and on opening night does not show up. Angela is forced to take the stage in her place. At the last minute Nanette shows up and pushes Angela off the stage. Angela decides to give Nanette a lesson in manners by dropping the curtain before Nanette can take her bows.

Episode 17A – "Cut to the Chase" – Angela barters with friends to keep from being grounded.

When Angela's Dad gives her a bad haircut right she takes her brother's autographed baseball hat without his permission. Angela wears the hat to school the next day but Mrs. Brinks confiscates it when Nanette points out the rule about wearing hats during school hours. Angela tries to get the hat back during Mrs. Brinks 'golden star auction' of confiscated items but Nanette acquires the hat by outbidding Angela with one more golden star. Angela has to bargain with Nanette to get the hat back which sets of a series of deals that Angela must make with her friends in order to get the rhinestone dog collar that Nanette is demanding as compensation for the hat. In the end Angela gets the hat back but also gets grounded and Nanette's dog ends up with a rash from the fake rhinestone collar.

Angela is excited that it is finally her turn to work in the school store. Johnny Abatti is to be the manager and Angela the helper. Angela has a great day in the story and basically takes over Johnny's job without him even realizing it. The following day however Johnny is home sick and of course Mrs. Brinks assigns Nanette to the job of manager. For the rest of the week Angela has to do everything Nanette tells her to do, like scrubbing floors and counting paper clips. When 33 cents goes missing from the till Nanette is quick to blame Angela and Mrs. Brinks is quick to agree. It is discovered later that Nanette actually lent the money to Mrs. Brinks to buy a stamp. Mrs. Brinks is very embarrassed by her mistake and offers to make it up to Angela. Angela becomes the manager and has Nanette at her beck and call.

Angela's Mom starts to feel guilty when she sees that her passion for her artwork often distracts her from her motherly duties. Geneva promises to turn over a new leaf effective immediately. The next morning there are eggs and school lunches packed. Angela thinks this is great – at first. Gen begins to become obsesses with being the 'perfect' mother and having the 'perfect' tidy house...and the 'perfect' family. Angela starts feeling like she is living in one of those cheesy seventy's sitcoms! It is the last straw when Gen tries to get Angela to dress like Nanette! Angela tells her Mom that she wants the 'old Mom' back and Gen is totally relieved. It turns out that she has been miserable with her new 'perfect' life.

Episode 18B – "Skipping Lessons" – Is Nanette gone for good?

Angela is delighted when all of Mrs. Brinks letters of commendation to the School Board about Nanette culminate in the School Board advancing Nanette to the Fourth Grade! Mrs. Brinks is devastated by the loss of her prize pupil and in her vulnerable state she transfers all of her previous affections for Nanette onto none other than Angela. At first Angela is in her glee after all teachers pets get away with everything! Soon however Brinks' attention becomes overwhelming and she begins following Angela everywhere – even to the treehouse. Thankfully Nanette is not doing so well in the Fourth Grade popularity polls and decides to return to Mrs. Brinks' Third Grade class. At first Angela is disappointed but then she realizes that although she is gaining a Ninnie-Poo she is also losing the clingy Mrs. Brinks.

Episode 19A – "View to a Brinks" – Curiosity killed the cat.

Gina can hardly contain herself – she just witnessed Mr. Brinks coming out of the sporting goods store with Badminton Rackets. The kids know what that means – NAKED BADMINTON! They rush to their treehouse only to find that they can't see far enough into the Brinks yard to get a good look. There is only one thing to do – build higher. The kids go to exhaustive lengths to build the treehouse high enough to get a good view but they can only see the shuttlecock going back and forth over the net. When Nanette looks out of her bedroom window and sees the treehouse she is disgusted by the fact that it is blocking her scenic view of Tapwater Springs and orders Alfredo to tear it down immediately. The kids are desperate now to see the Brinks before Nanette ruins everything. Quickly Gina comes up with a new plan that allows all of them to get the birds eye view they've been waiting for – unfortunately!

Episode 19B – "Injury to Insult" – Angela comes down with a case of Pink Eye.

When Angela comes down with a case of Pink Eye her Mom tries to make her feel better by making her a black eye patch just like pirates wear. Angela is excited to wear her new eye patch to school and revels in the attention it brings from the entire class – including Mrs. Brinks. Nanette is not at all happy with Angela's new found popularity and the next day shows up to school in a wheel chair claiming that Angela stepped on and crushed her dancing toe. Now all of the attention is once again on Nanette and Mrs. Brinks orders Angela to be Nanette's personal assistant since it was Angela's fault in the first place. Angela knows Nanette is faking but she just can't prove it, no matter how hard she tries. Finally Nanette is exposes as the fake she is but of course Mrs. Brinks just claims Nanette to be a 'miracle child'.

Episode 20A – "The Martyrdom of Saint Nanette” – Angela attempts to control her revengeful fantasies.

After Josephine tells the class about Ash Wednesday, Nanette, wanting her memory to live on for eternity, suggests that the entire class participate in sacrificing something for forty days. Angela decides that she will stop imagining things about other people. In other words, stop fantasizing about revenging Nanette. And Nanette takes a vow of poverty, which includes giving up her chauffeured town car, fine cuisine, and of course her magnificent wardrobe. Angela is really put to the test when Nanette enters wearing her signature orange dress, claiming that it isn’t easy wearing ‘tasteless clothes’. It isn’t long before Angela discovers that Nanette is not keeping true to her vow of poverty. She tells Mrs. Brinks that she spotted Nanette sitting down to an elaborate feast, but Mrs. Brinks is quick to point out that Angela promised that she would not let her imagination get the better of her, and dismisses Angela’s claims. On her way back to her desk, a jar of caviar falls from Nanette’s pocket, ensuring Angela that this day will most definitely live on for eternity!

Episode 20B – "The Crossing” – Angela blames herself for the crossing guards’ firing.

Sherman, the class chick, escapes from his box, and Angela convinces Ms. Jenerette, the school crossing guard, to leave her post and stop the chicken from crossing the road. By doing so, Nanette ends up being late for her salon appointment, and as a result, Mrs. Manior gets the beloved crossing guard fired. Angela feels terrible and assists Ms. Jenerette on her next set of jobs, but each time she lends a hand, something goes awry and Ms. Jenerette is continually fired. In the meantime, Mrs. Manior sets up a traffic light to replace Ms. Jenerette, but when the light changes while Nanette is in the middle of the cross walk, it is Ms. Jenerette who is there to save her. Ms. Jenerette is awarded her job back, and at the suggestion of Angela, a pay raise! Less « 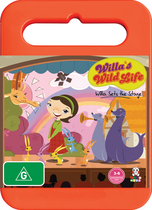