Create a Madman Account Already a Member? Sign In
Madman Cartoons Huntik, Secrets & Seekers Volume 3: The Treasures of the Argonauts

Huntik, Secrets & Seekers Volume 3: The Treasures of the Argonauts 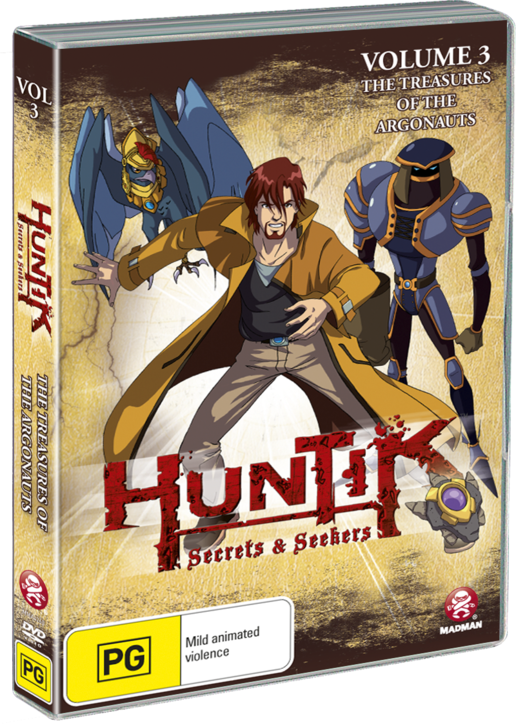 "The action sequences are exciting, the Titans are fearsome, the story is interesting, and the animation is lush and beautiful."

An odyssey to ancient Greece

Hunik follows the adventures of Lok Lambert, Sophie Casterwill their mentor Dante Vale and the rest of the Huntik Foundation as they use magical powers and allies called Titans to explore strange locations, find lost treasures and battle evil. Volume 3 features episodes 10 - 13


pisode 10: The Treasures of the Argonauts
Guggenheim gives Dante’s team a mission to find the Argo, a magical ship owned by the ancient Greek hero Jason, and to retrieve its logbook and Jason’s Titans, the Hoplites.

Over in Libya, DeFoe is on a mission for The Organization to retrieve a dangerous Titan called Lindorm. Upon hearing that his enemy Dante Vale is only a short plane flight away, DeFoe abandons his... More »

Hunik follows the adventures of Lok Lambert, Sophie Casterwill their mentor Dante Vale and the rest of the Huntik Foundation as they use magical powers and allies called Titans to explore strange locations, find lost treasures and battle evil. Volume 3 features episodes 10 - 13


pisode 10: The Treasures of the Argonauts
Guggenheim gives Dante’s team a mission to find the Argo, a magical ship owned by the ancient Greek hero Jason, and to retrieve its logbook and Jason’s Titans, the Hoplites.

Over in Libya, DeFoe is on a mission for The Organization to retrieve a dangerous Titan called Lindorm. Upon hearing that his enemy Dante Vale is only a short plane flight away, DeFoe abandons his mission and heads to Greece, which annoys Grier, who believes in following orders.

Dante and friends find a long cave on the river, and a Holotome scan shows there’s a good place to hide a boat at the bottom. Just as they finish dragging the boat to the surface using their Titans and power, DeFoe arrives and attacks them! Dante’s team is weak from using so many powers, and the battle turns against them. But something weird starts to happen to DeFoe—he starts to act crazier and crazier. The team is eventually able to disarm him, and Dante tells Grier that he can take DeFoe with him if they call a truce. Grier agrees, always honoring a promise, and he and the Suits leave with crazy DeFoe.

The heroes find a secret compartment in the ship that contains directions to the real Argo on another island. Grier hands over DeFoe to Rassimov, who compliments Grier on his dedication to following orders.


Episode 11: The Beautiful Trap
The heroes travel by boat to the island where the Argo is hidden. On the way, strange vines damage the engine, and they’re forced to land on a different island to make repairs.
The leader of the island is a woman named Madea. She welcomes them and agrees to help them fix their boat. Madea’s people all have interesting secrets: one girl says Lok reminds her of a man with a book who visited ten years ago, one girl says her family used to serve the Casterwills, and one claims to know of special herbs on the island that can break even the worst curse. One by one, the heroes are distracted from fixing the boat and get caught up trying to figure out the mysteries of the islanders. Zhalia refuses to help, and she spends her time sleeping on the boat.

When nobody returns to the boat after a full day, Zhalia realizes something is wrong. Exploring the strange island, she finds that the entire island is a magical trap that uses illusions to trick its guest. Zhalia attacks the power source, breaks the illusions, and finds Madea’s amulet. Madea is Krono-Titan that can confuse minds and create illusions. As Madea is too unstable for anyone on the team to bond with, the team decides to take the amulet to the Huntik Foundation as soon as they can. They repair the ship and continue to the location of the Argo.


Episode 12: Like Father, Unlike Son
At another island, Lok tries to control the aggressive Titan Lindorm, but he barely manages to force it back into its amulet with help from Zhalia. Nearby on the Isle of Sutos, cruel warlords battle for leadership, but Grier shows up with helicopters and declares the island under the control of The Organization!

The heroes reach Sutos and find The Organization in charge. Lok, Sophie, and Cherit distract the locals so that Zhalia can look for the sunken Argo and Dante can take care of Grier. During the battles on the island, Lok gets angry enough to summon Lindorm, who quickly knocks out a bunch of Suits, but the people of Sutos arrive and angrily attack Lindorm! Lok sends his new Titan back to its amulet before anyone gets hurt. Zhalia shows up with the Hoplites, centaurlike Titans once owned by Jason. The heroes confront Grier, who explains that he is there to bring order to his home island.

Years ago, Grier’s father was ruler of Sutos. He was killed by a crazed bunch of rioters when he abandoned his rule. Since then, the island has suffered from civil war because of the warlords. Dante’s team realizes that despite being part of The Organization, Grier isn’t a bad person. He’s only trying to help his people.

Grier lets them leave, as The Organization didn’t even know the Hoplites were hidden on the island.


Episode 13: Home Turf
The heroes visit Lok’s mom Sandra, who used to be a researcher for the Huntik Foundation.

Meanwhile, in Austria, a creepy Organization boss named Klaus shows off some of his new techno-magic inventions to his Suits. Rassimov orders Klaus to help get rid of Dante.

Scarlet Byrne, a Huntik Seeker who used to babysit Lok, arrives at Sandra’s house. Unbeknownest to her, a strange car was following her. Scarlet tells the team of her mission to find the Titan Gybolg, which once belonged to the Irish hero Cu Chulainn, and the heroes agree to help her. Around this time, Zhalia receives a phone call—from Klaus! Klaus wants her to sabotage Dante so that the Suits can capture him!

Scarlet’s mission takes the heroes to a tomb, where they find a secret chamber. As usual, the Suits are right behind them, and they attack Dante and friends! Our heroes defeat the Suits, despite Zhalia not doing anything during the battle—she claims she suddenly felt sick, but really she wasn’t willing to help attack Dante. More Suits attack while the heroes try to summon Gybolg. Luckily, Sandra arrives at the last minute with her Titans, Lunar and Solar! It turns out that Sandra is a Seeker, too! The team drives off Klaus’s Suits and head home.