In 2015, the "Angels" have returned, and Shinji Ikari, a fourteen-year-old child of the new Earth, is forced by his father Gendo - commander of the secret organization NERV - to pilot the monstrous biomechanical weapon called "Evangelion" to match the Angels' fearsome power. As a disembodied Shinji drifts in visions, merged with the esoteric fluids of the Evangelion, his father's on-serving lieutenant, Fuyutsuki, is kidnapped for interrogation by SEELE - in German, the "Soul" - the council of superiors whom NERV has been double-crossing for some time now... 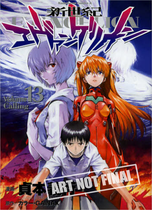