Welcome to the End of the World!

Loki, greatest of all Assassins, returns to his guild only to find it in ruins and his brethren slain. The only clues to the architect of this destruction are the symbol of an ancient order of warriors and the name ""Chaos."" His heart set on vengeance, Loki sets out to find this Chaos and repay him in kind. Another killer is on Chaos' trail, the cursed swordsman Skurai, who seeks the blood that will satisfy his demon sword's thirst. Skurai carried out the Assassins' Guild massacre to set a trap for Chaos. Last time he and the Rune Knight met, Chaos escaped, but weakened by a battle with Loki he should be easy prey. Destiny brings these three great warriors together, but in the mortal realm of Midgard, Destiny doesn't always go as the gods planned. 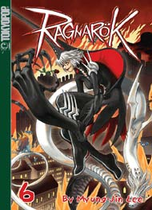